Knowing how and when to manipulate light, climate and irrigation is essential to delivering high quality yields.  Our good friends and partners at Growlink have put together a comprehensive guide to help cultivators better understand crop-steering, from concept to application.  We’ve included a small section of the guide’s key points below.  Contact us today for the full guide, as well as more information on how we can help steer your crop to the next level.

What is Crop Steering?

Crop steering manipulates a plant’s environment and root zone to influence metabolic/hormonal changes that inspire vigorous growth and greater yields. This is achieved by dialing in environmental conditions throughout different growth stages and managing irrigation events to mimic natural stressors the plant would encounter in nature. These changes can help influence a plant’s growth patterns either vegetatively or generatively. Vegetative steering allows the plant to focus on the growth of leaves and stem structure while steering generatively focuses on flowering and reproduction.

Manipulating environmental conditions and irrigation events allows cultivators to steer the plants’ metabolism and hormone balance either more vegetatively or generatively. This is not to be confused with the vegetative or flowering growth phases of cannabis, but rather the growth characteristics the plants demonstrate. Let’s examine the differences and the right time to direct growth towards a particular stage of the cannabis plants’ life cycle. 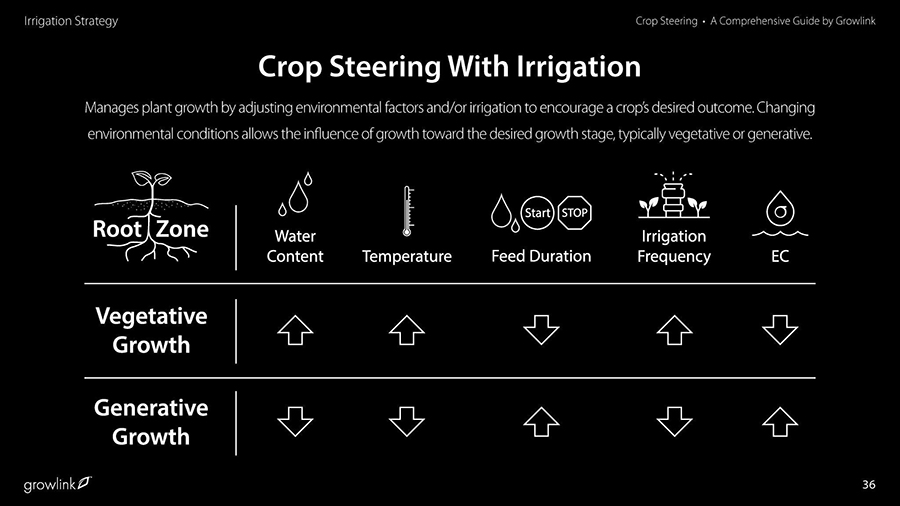 When you steer a plant vegetatively, you are essentially simulating perfect, stress-free conditions in nature. This signals to the plant that it’s not in any danger of dying, and allows it to

thrive, all while focusing on vigorous leaf growth and root output, as well as fortifying its stem structure to support the new growth. In order to achieve this, several adjustments should be made to both your irrigation strategy and environment. Ideally, warmer air temperatures paired with higher humidity will allow for optimum vapor pressure deficit (VPD) for vegetative growth.

This is important because it reduces the transpiration needs of the plant, which lowers the osmotic pressure in the substrate, allowing for a higher uptake of nutrients.

Light intensity should remain low to moderate during this time as well. Too much light can cause stress and increase the need for transpiration, which would have an opposite effect on the osmotic pressure we are trying to achieve. Additionally, increasing the number of irrigation events or shots will help you achieve a higher volumetric water content (VWC) and lower your substrate’s salinity or electrical conductivity (EC) by essentially flushing out the excess salt build up through runoff. It is important not to have too high of an EC in the substrate when steering vegetatively due to the lower osmotic pressure, since it allows the plant to uptake a higher percentage of available nutrients.

When you steer a plant generatively, you are simulating drought conditions found in nature. Drought conditions push the plant into survival mode, signaling a hormonal shift that allows it to focus heavily on reproduction. As a result, the plant will focus most of its energy on ‘pre flower’ bud site (calyx) creation and expansion to increase its chances of being pollinated. This, in turn, allows you to reap the benefits of a faster and more numerous bud set, which is the foundation of a bountiful harvest. Similar to steering vegetatively, you need to make several changes to your environment and your irrigation strategy to help steer the plant generatively.

To achieve optimum VPD levels for generative growth, both temperature and humidity should be lowered slightly. Light intensity should reach its peak to increase the need for transpiration which will ultimately cause a slight increase in osmotic pressure in the substrate. The lowering of temperature will aid in keeping leaf temps optimal under the increased light intensity. The increased rate of photosynthesis brought about by the increased light intensity will allow more photosynthates to be created, which can be used to develop flowers later on. Ultimately, the increase in osmotic stress causes the plant to take up more water than nutrients which, paired with fewer irrigation events at increased intervals, allows the substrates’ soluble salt content (EC) to rise. 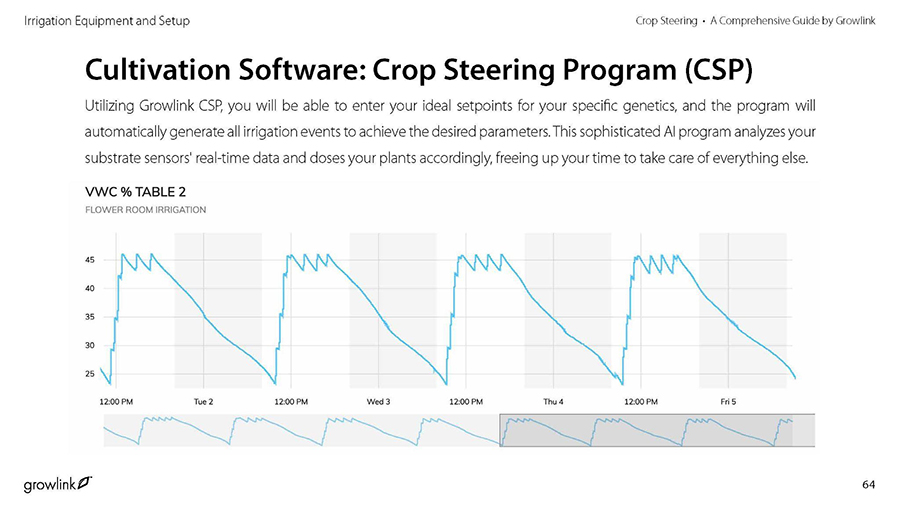 Contact us today for the full guide, as well as more information on how we can help steer your crop to the next level.